Mikhail Tal, the 8th World Champion, was born on November 9th, 1936 in Riga. He probably would have been happy to know that the 44th WCM begun on his birthday. Let's see some statistics of these two great players, which are for sure the number one and two in the world.

In this sereas of videos you'll going to learn how Carlsen kept his World Chess Championship crown after 50 hours or play!

In 2005, Caruana moves to Europe and plays under the flag of his mother's country, Italy. In 2007, it was his time to won the top chess title. At the age of 14 years old, 11 months and 20 days he becomes the youngest even Italian and US GM.

In January of 2006 Magnus break the barrier of 2600 ELO rating and Caruanna followed him at April of 2008. Mangus continues to raise his rating and on July of 2007 he managed to break 2700 barrier! Caruana also followed this achievement and he crosses 2700 ELO points at September 2010. However in the same year, 2010, Magnus was the number 1 ranking player in the World and since then he holds this position.

Caruana also manages to join the top elite of chess players in 2012; from number 17 moved to number 5.

As we already know Magnus is holding the title since 2013. Fabi shocked the chess world with his unbelievable performance; starting the Sinquefild Cup with a stunning 7 game winning streak, including beating Carlsen. On May 2015 he is playing again with US Chess Federation.

Older Encounters Between the Players

The 12 game match organized by FIDE, the World Chess Federation, and its commercial partner Agon. The match took place in London at the College in Holborn between 9 and 28th November 2018. It was the first time in chess history that all classical time control games have been drawn. Nonetheless, the games were very fighting and exiting. Both players had their winning chances. In the end, Carlsen won three games in a row in the tie-breaks and he kept his title.

Caruana qualified as challenger by winning the 2018 Candidates tournament; an eight player double round-robin tournament played in Berlin Germany on March from 10 to 28.

If the rapid games had been tied 2–2, then the mini blitz games will take place. The player with the best score in any two-game blitz match would be the winner. The time control set to 5 minutes plus 3 seconds increment per move.

If the blitz matches drawn then one sudden death "Armageddon" game could decide the match. White receives 5 minutes and Black 4. Both players receive an increment of 3 seconds starting from move 61. White should win. With the draw, or if he wins, then the Black will win the match. The color will be decided by drawing of lots.

The total prize fund for the event was 1 million euros. The winner of the classical event would have been divided 60% vs 40% between winner and loser. In the tiebreaks, the split was at 55% vs 45%.

One of my Games 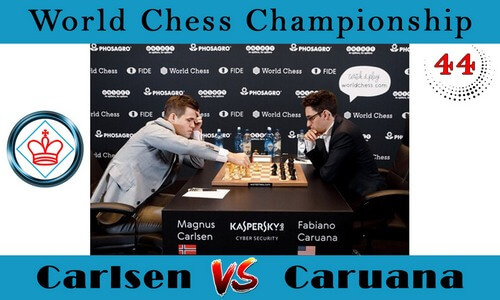 You can see and study the videos by clicking the button below: